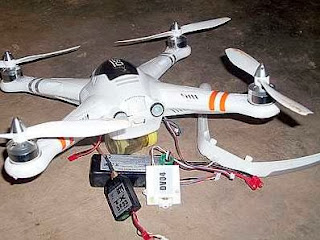 A quadcopter is at the center of confusion in Ibadan following its crash in Awotan in Ido Local Government Area of Oyo State. Nigerian Tribune called the device a spacecraft and it said aviation sources had confirmed the object as a United States’ drone on an espionage mission in Nigeria.

Investigations by IBPulse.com however revealed that the “spacecraft” is a quadcopter which is a form of helicopter that is lifted and propelled by four rotors. It is extensively used in unmanned aerial vehicle (UAV) research.

Nigerian Tribune added that the spacecraft’s registration number is TX 5803, suggesting that it took off from NASA base in Texas in the US. IBPulse.com can confirm that the code is not a registration number; it is the code of the emitter which is an essential part of the device. According to rc-fever.com, the  Walkera 5.8G TX Emitter TX5803 200mW is used for connection with Walkera FPV Transmitters Devo F7 and F4.

The crashed device is similar to the Walkera QRX350 which costs less than $400 on Helipal.com. According to the website, it is good for fun flying by experienced players.

It added that the model is particularly suitable for aerial filming.
It said: “If you are a experienced RC heli player, you can fly the X350 like a helicopter, like fast movement and banking into corners, this is funny to those who knows how to play heli.”

Those who saw the device in Ibadan said it dropped down from the orbit, flew into a toilet in the house of Ashipa of Awotan, Chief Tajudeen Adetoro, a few minutes after his grandson, Afeez Adewale and daughter-in-law, Adikat, left the toilet.

“When it flew out, we rushed after it and it was found hanging on the antennae of our neighbour…making a terrible noise and emitting heavy smoke,” Chief Adetoro said.

In a chat with IBPulse.com, ace broadcaster, Tony Rowland Awobode (Don Tee) said the device could belong to expatriates at the International Institute for Tropical Agriculture (IITA) in Ibadan

Tru. Mayb from expatriates in IITA. Remember d squid mistook for mermaid”@IBPulse: @DonTeebaba that looks more like a toy and not a drone”
— Don T Tony Awobode (@DonTeebaba) December 29, 2013

The video below shows the device being used for aerial filming

Below is a video documentary on real drones