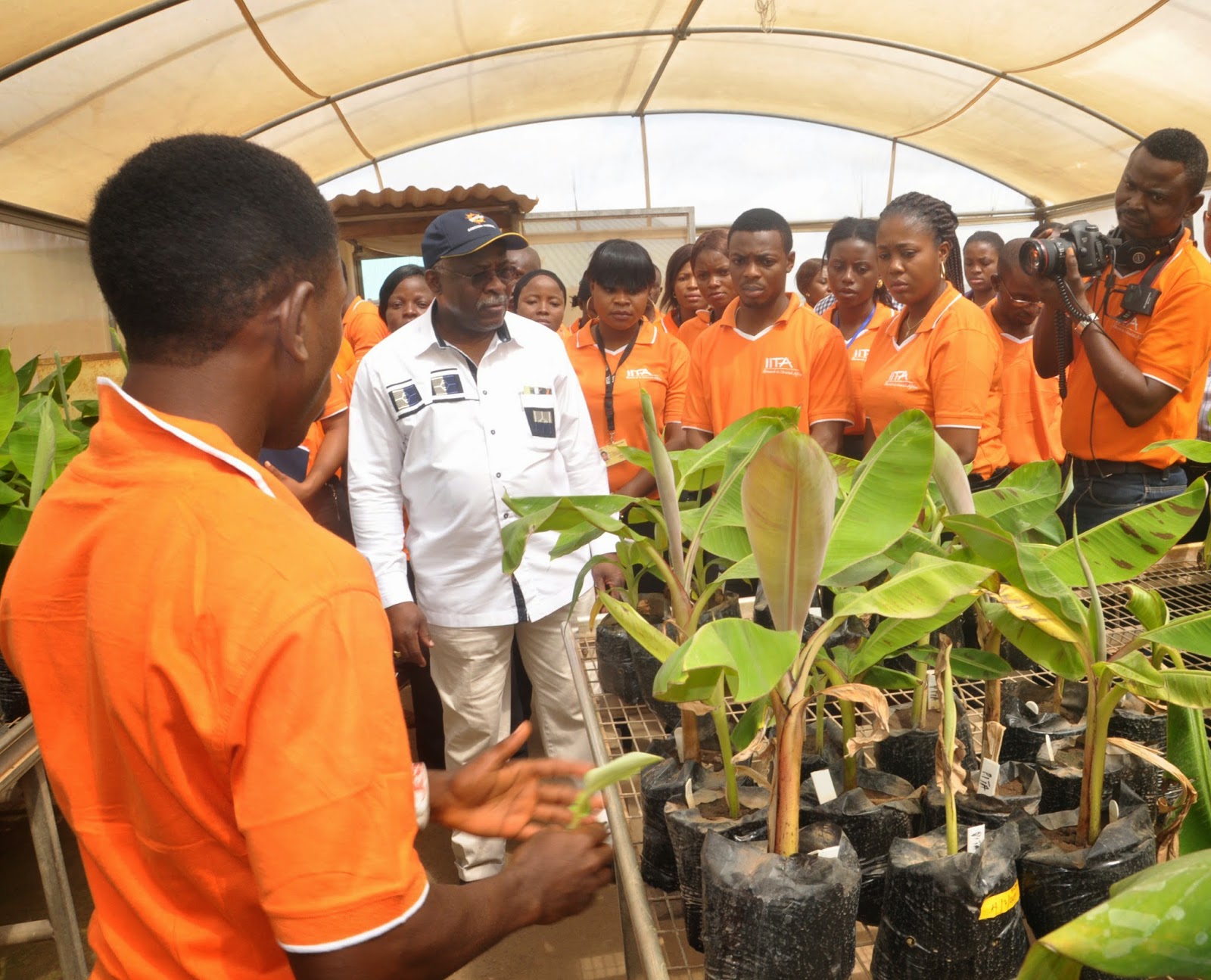 The activities of young men and women in the Youth Agripreneurs (IYA) program under the International Institute of Tropical Agriculture (IITA) have made the International Fund for Agricultural Development (IFAD) President Dr Kanayo Nwanze proud; and rekindled the hope of a new generation of African agricultural entrepreneurs that will feed the continent, create wealth and employment.
The IITA Youth Agripreneurs program was developed about 2 years ago after Dr Nwanze visited IITA in Ibadan, planted a tree to mark the rejuvenation of the institute, and in his speech called for investment in the youth. Inspired by Dr Nwanze’s speech the Director General, Dr Nteranya Sanginga took up the challenge to mobilize the youth, give them mentorship, teaching and training, thereby creating a passion in the youths to adopt agriculture as a business.
In less than 2 years, the group has recorded plausible achievements. These include producing and marketing over 30 tons of certified maize and soybean seeds, and over 280 tons of cassava roots, as well as multiplying over 3200 bundles of cassava stems and over 1000 suckers of plantain.
The group has also signed a Memorandum of Understanding with Akinyele Local Government of Oyo State to train 250 young people in agribusiness, obtained approval in principle from Oyo State Government for the construction of a Youth Education Center at IITA, and trained 33 young people from Cross River State.  They have also received approval for funding from IFAD, Forum for Agricultural Research in Africa (FARA), as well as IITA.
Addressing the young agripreneurs in IITA in Ibadan on Tuesday, Dr Nwanze said that the successes recorded by the youngsters were signposts to a brighter future for Africa.
“I am overwhelmed by your achievements…by what you have done and… I am proud of you,” the IFAD President said.
Despite an old proverb that says, “He who plants a walnut tree expects not to eat of the fruits,” Dr Nwanze noted that sometimes we live long enough to see the walnut tree bear fruits.
“And I think I am one of those few who have been blessed with such an occasion,” he added.
Dr Nwanze drew from the literal meaning of the word “IYA” in Yoruba meaning “motherhood,” and described the Youth Agripreneurs program in IITA as the most successful “incubator” that would raise the necessary human resources to address the food security concerns not just of Nigeria but also of Africa.
He advised the youngsters to take advantage of the program and plan for a better future.
“My future is behind me; your future is in front of you. When you are my age, you will know why I say that it’s behind me already. I have lived my life; your life is just beginning. What you do today will determine your future, so please make your future as robust as you wish it to be. Learn all you can while you are here under the protection of IITA because the outside world is very challenging. Your greatest support will be your passion, your conviction, and your drive to move forward,” he counseled.
Earlier, Evelyn Ohanwusi, one of the agripreneurs, in her presentation said the group envisaged that 40% of it
s members would become self-employed; 20% would further their studies with income generated from their activities, 20% would run the IYA program, 10% would be employed by the Business Incubation Platform of IITA, and 10% would be employed by other private and public institutions.
No Result
View All Result