Muslims troop to Ibadan to see tree with Arabic inscriptions 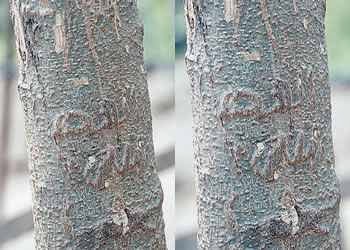 Muslims are trooping in large numbers to Kokoko village in Egbeda Local Government Area of Oyo State to see the tree that is said to have Arabic inscription of Allahu etched into its trunk.

According to Nigerian Tribune, the tree has “practically become an idol following the rate at which some Muslims troop to the village to catch a glimpse of the tree, as well as worship under it.”

It was gathered that the tree was planted by a prophet and Founder of a Cherubim and Seraphim Church (Oke-Imole), Prophet Taiwo Adisa. According to one of his children, Dare Adisa, his father several attempts to scrape the inscription off but it kept coming up again.

“My father noticed the inscription on the tree in June last year and he made several attempts to scrape it off but it kept coming up again. That was when he decided to call a Muslim neighbour to come and take a look at the inscription. It was that our neighbour that advised him not to do anything to it any longer; that he should just leave it. Ever since then, people have been coming here to catch a glimpse of the tree and some Muslims actually believe that the tree is a miraculous tree, and that is why people keep coming here to pray under it. In fact, some of them do request for the leaves as they believe it has healing power,” he said.

Already, a photographer has been permanently on standby by the tree selling pictures of the inscription at N100 per copy to those who are interested in buying them. In less than one hour, Nigerian Tribune said 10 people visited the site of the tree, some taking the picture of the tree with their phones, while some actually bought the hard copies from the photographer.

One of the visitors who spoke to the newspaper said she believes the tree is miraculous and has bought a picture to be kept under her pillow.

“I believe this tree is a miraculous tree for having such an inscription on it. If one takes a look at it very well, one will discover that it (inscription) was not carved and I so much believe in it. That is why I am buying a copy of the picture which I will be putting under my pillow whenever I am going to sleep,” she said.

Another lady said she will be using the leaves as means of getting healed.

She said: “I am taking some of the leaves home and I will put them in a bottle of water, which I will be drinking together with my children, because I believe they have powers to heal any kind of ailment. As I am going home now, I will inform my neighbours to come and pay a visit to this place as well so that they can tap from the blessing.”

According to the photographer, visitors are coming to the site from near and distant areas including Lagos, Osogbo and Iwo.

“People are coming from as far as Lagos, Osogbo, Iwo and other neighbouring cities and towns. Only God knows how they got the information. If you stay here till evening, you will be amazed with the crowd you are going to see.”

He said further: “Some Muslim clerics have come to meet with the prophet asking him to sell the land to them. I do not know the amount they offered, but I do not think he is willing to sell the land. As you can see, this place has turned to a kind of mecca. So, I do not think he is ready to part with the land and the tree. He once told me that God revealed to him that something would happen that would bring his name to limelight, and I want to believe it is this “miraculous” tree.

Commenting on the incidence, a Muslim cleric, Alhaji Lateef Tiamiyu said the case is not impossible. He added that it could be real or fake.

He said: “There is nothing impossible. God is more powerful than anyone of us and can do anything He likes. About the Arabic inscription on a tree, from my own point of view, I think it is possible and at the same time, it may be stage-managed. Maybe when I see the inscription myself, I will give my candid opinion; but till then, I will say nothing is impossible for God to do. It maybe real and it may not be. God knows best.”

Follow @IBPulse for latest information, exclusive reports and incisive analyses from Ibadan. Check us out on http://t.co/NC6GrLSXqA