Oyo, others have space for agricultural opportunities than Lagos – DAWN Commission 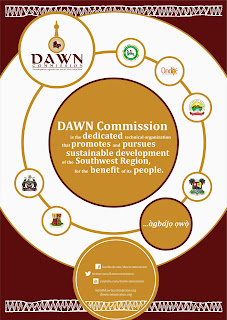 The Development Agenda for Western Nigeria (DAWN) Commission has revealed that in spite of the high rate of development of Lagos state, Oyo and other states in the southwest region have sufficient space for agricultural development that the nation’s commercial capital city can depend on.

In an exclusive chat with IBPulse.com, Dipo Famakinwa, Director General of DAWN Commission, said identifying such dependencies and opportunities for symbiosis is the focus of the commission.
“Lagos cannot be a standalone state,” he said. He added: “There are other things that Lagos doesn’t have but that other states have. For instance, Lagos is not endowed with the kinds of, and space for agricultural opportunities that you can find in Ondo, Osun or Oyo. So there are some kinds of dependencies that Lagos also has on the rest of the region.”
He said Lagos state has an enormous market that other states in the southwest region can rely on.
He said: “Other states in the region may depend on Lagos for market but Lagos is also dependent on many of those states for its own agricultural productivity. It’s a symbiotic relationship.
“If you are looking for symbiosis, you must ensure a process that would harness the symbiotic relationship. There are things that Osun don’t have but are present in Ekiti. Let’s discover them and see the communal possibilities and opportunities to ensure that all of those things are harnessed for the development of the region.”
He said the western region of Nigeria is basically the same and states in the region “possibly the same development requirements and development aspirations.”
“Enough of thinking in silos, let’s’ see how we think, work and act together to ensure that those common development aspirations are fulfilled,” he told IBPulse.com.
No Result
View All Result